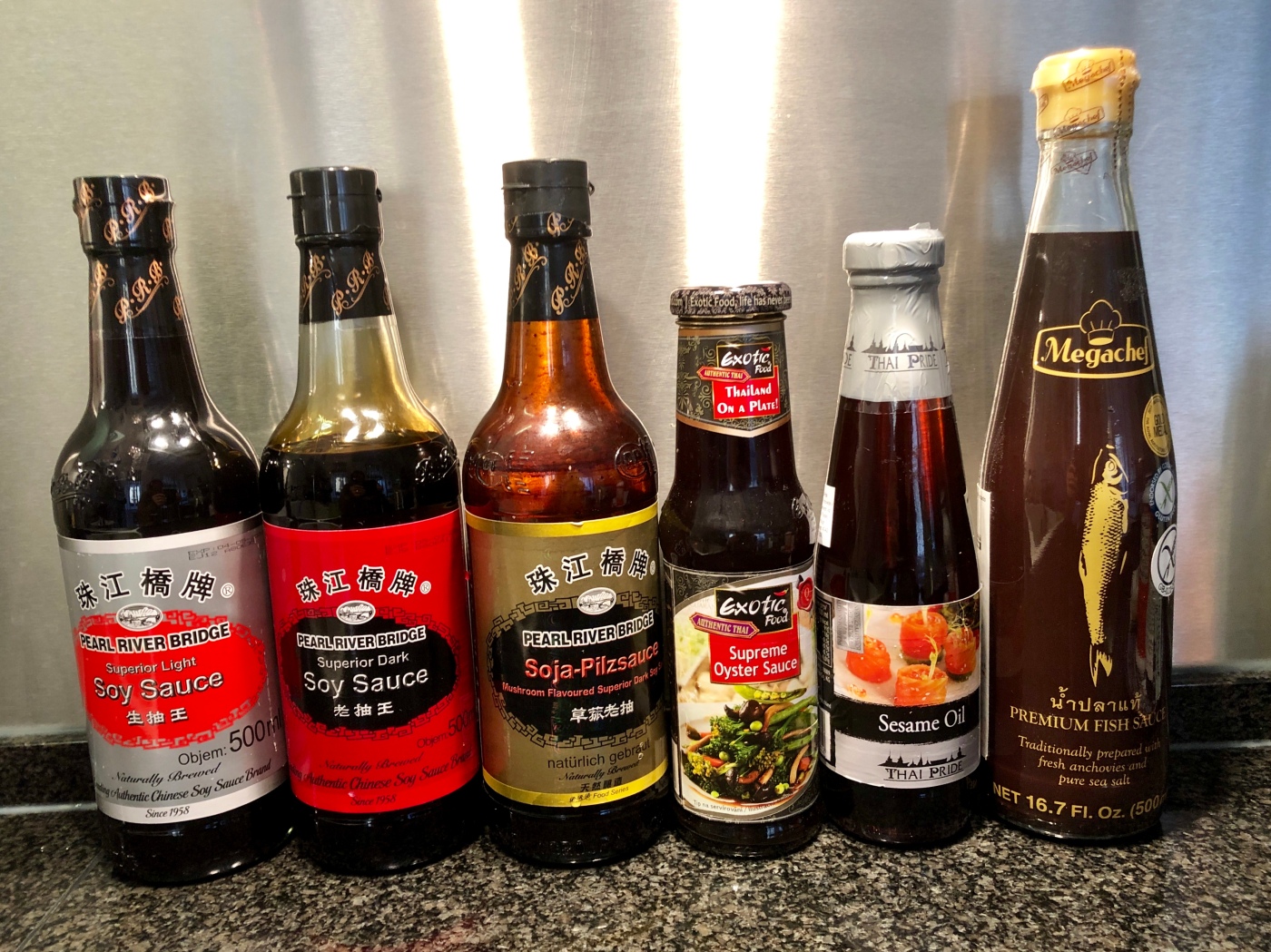 Here are a few essentials, from left to right :

Soya Sauce
Made from a fermented paste of soybeans, roasted grain, brine and Aspergillus sojae molds. The taste is rich, full of Umami and used in most Asian dishes.

Dark Soy Sauce
As the name indicates, it is a dark-coloured soy sauce used mainly for adding colour and flavour to dishes. It is richer, slightly thicker, and less salty than other types of soy sauce. It is also aged longer.

Oyster Saucce
A thick and dark brown condiment made from oyster extracts, sugar, salt and water thickened with corn starch. Some versions may be darkened with caramel, though high-quality oyster sauce is naturally dark.

Sesame Oil
As the name indicates, sesame oil is a vegetable oil derived from sesame seeds. Besides being used as a cooking oil, it is used as a flavour enhancer in many cuisines, having a distinctive nutty aroma and taste. The oil is one of the earliest-known crop-based oils. Try to use it at the end of the cooking, at it looses its aroma and taste when heated.

Fish Sauce
A liquid condiment made from fish or krill that have been coated in salt and fermented for up to two years. It is used as a staple seasoning in East Asian cuisine and Southeast Asian cuisine, particularly Burma, Cambodia, China, Indonesia, Laos, Malaysia, Philippines, Taiwan, Thailand, and Vietnam. The smell can be quite pungent difficult for some. When opened, it can oxidize and get darker with time.

Green Curry Paste
Ok… this is a little cheat – When you don’t have time to make a homemade version – I use a store-bought one, which is quite acceptable. It consists of a thick paste made of traditional ingredients you find in Thai Cuisine which include green chilies, shallots, galangal, garlic lemongrass, kaffir lime leaves and Thai sweet basil. I will provide a recipe for a homemade version I often use.

Red Curry Paste
Very similar to the Green Curry paste – It contains Dry red chiles, white peppercon, cumin, coriander, garlic, fresh coriander, lemongrass, shallots, galangal, kaffir lime leaves and shrimp paste – Easy to make in a blender.
I will provide the recipe for a home-made version. … but really, the store-bought one is excellent.

Black Chinese Vinegar
Black vinegar is an inky-black vinegar aged for a malty, woody, and smoky flavour. It was first popularized in East Asia, particularly southern China, where in the city of Zhenjiang – Commonly known as Ching Kiang vinegar.

Chinese Cooking Wine
Shaoxing wine is one of the most famous varieties of huangjiu, or traditional Chinese wines, fermented from rice. It originates from the region of Shaoxing, in the Zhejiang province of eastern China. It is widely used as both a beverage and a cooking wine in Chinese cuisine.

Sweet Rice Wine
Often referred to rice wine vinegar, is made by fermenting the sugars in rice first into alcohol, and then into acid. Compared to white distilled vinegar, rice vinegar is less acidic with a delicate, mild, and somewhat sweet flavour.

Rice Vinegar – Unsweetened
also referred to rice wine vinegar, is made by fermenting the sugars in rice first into alcohol, and then into acid. Compared to white distilled vinegar, rice vinegar is less acidic with a delicate, mild, and somewhat sweet flavour.

Mirin
Mirin is an essential condiment used in Japanese cuisine. It is a type of rice wine similar to sake, but with a lower alcohol content and higher sugar content. The sugar content is a complex carbohydrate that forms naturally during the fermentation process; no sugars are added.